The density stratified flow plays an important role not only for leaching of evaporites but also for various operations inside of the cavern and in sub-surface salt mine plants (e.g. backfill of brine).

Together with NG Consulting and CT IT Consulting we developed a method to observe the density stratified flow of two differently concentrated brines in laboratory scale. On the basis of an adapted method of light extinction measurements the density distribution of the fluid inside of a glass vessel is recalculated using a large set of photographs. For that purpose one brine is colored with methylene blue.

A software was developed for the quantitative data analysis. It calculates from some thousand pictures – taken every 3s to 5s – the density distribution of the brine, using a calibrated color dependence. Thus, we are able to follow the distribution and blending of the two brines.

The therefor developed algorithm consers themass balance. Hence, the received results can be used directly to quantify the observed density distribution and to calibrate the CFD model. The profiles (below) demonstrate the vertical density distribution at selected positions of the glass vessel.

The obtained results based on the lab tests help us to better understand the density stratified flow in real scale caverns or other cavities. By recalculation of the experiments with the CFD model we are able to verify the model assumption and to adjust the model. Thus, by aid of the cavern flow model we can apply the findings from the lab scale to realistic cavern shapes and cavities. 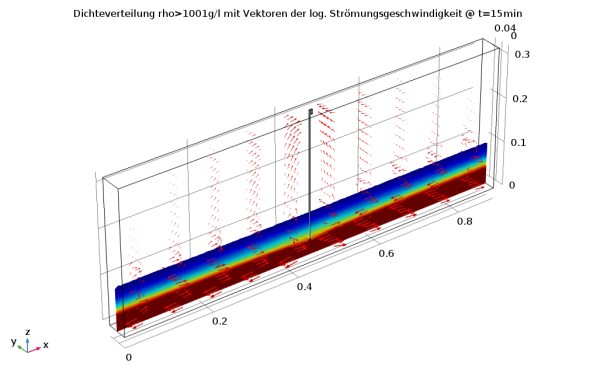